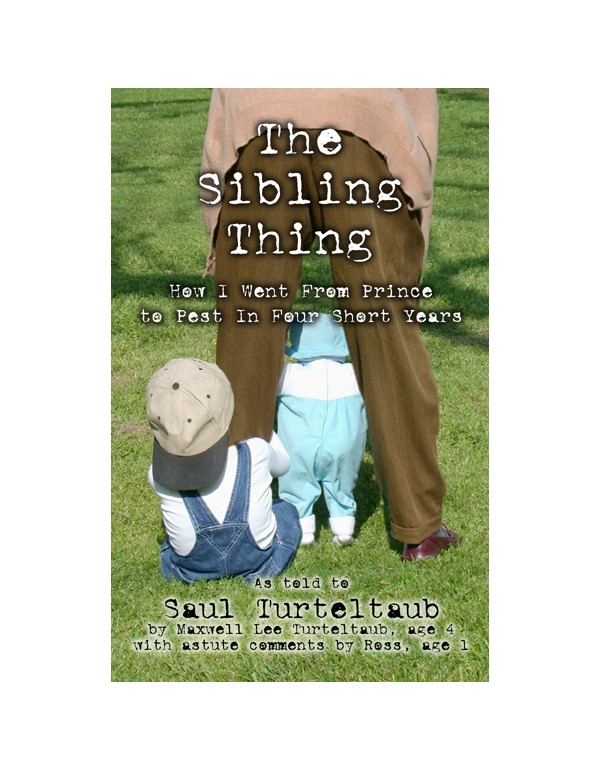 Max is back, and he’s got a little brother!

In his Tallfellow bestseller, The Grandfather Thing, Saul Turteltaub created a warmly comic memoir of his grandson Max’s first year, highlighted with Max’s “own” commentary and sage observations.

“He started to crawl. I don’t know what took him so long.” (Ross: Daddy said you didn’t crawl until you were nine months, and then you only crawled backwards. Weird.)

Witness first-hand the ups and downs of sibling rivalry as told to Grandpa. With astute asides by baby Ross, The Sibling Thing captures the mischief, misconceptions and marvels of childhood rivalries, along with a hilarious look at grandfathering… again!

What Siblings are saying:

“If Max thinks his little brother is a problem now, wait unilt he gets his own series. I loved this book.”

“A good read even if you’re an only child.”

“I have been a sibling all but the first year of my life. I was the first of four. I felt I was reading about myself and my brother, Nick. Saul, my longtime friend, has perfectly captured The Sibling Thing.”

Saul Turteltaub is a humorist, comedy writer and talk show host who is a multi-Emmy Award nominee for The Carol Burnett Show and That Was The Week That Was. He has written or produced over 30 major television shows including The Cosby Show, That Girl and the legendary Jackie Gleason Show. He received a Peabody Award and was nominated for a Humanitas award for the development of The Shari Lewis and Lambchop program. He lives in Los Angeles with Shirley, his wife of 40 years, and thanks to Max and Ross (pictures above) has learned all he needs to know about The Sibling Thing!