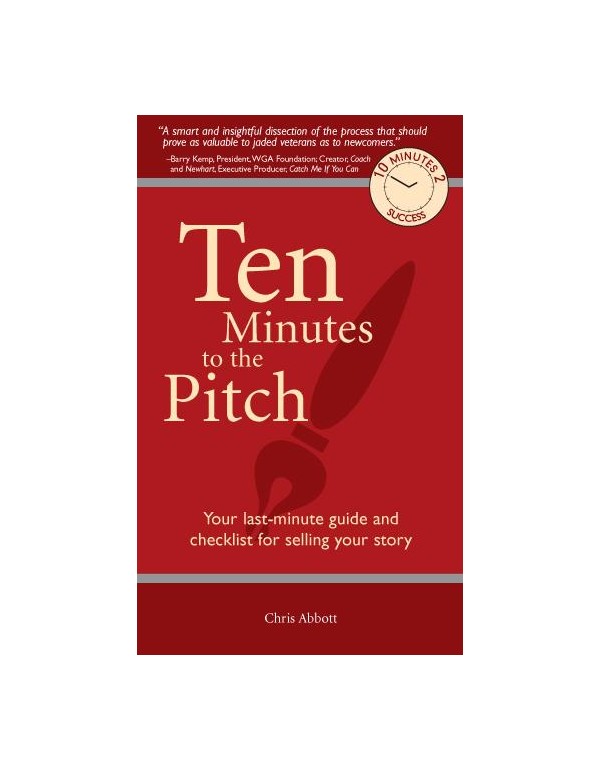 A Great idea can't pitch itself...
this book shows you how!

“A smart and insightful dissection of the process that should prove as valuable to jaded veterans as to newcomers.”

-Barry Kemp
President, WGA Foundation;
Creator, Coach and Newhart;
Executive Producer, Catch Me If You Can

“A must-read that can transform the ordeal of pitching into an enjoyable experience.”

Here's the usable, workable guide to selling your scipt, story or idea to the 'powers that be.' Compact and comprehensive, Ten Minutes to the Pitch is meant to be read once, twice, three times. Then, when it's time to perform, the Last-Minute Checklist settles you down, gets you focused and puts you in position to knock 'em dead. Insider advice with secrets and tips from a writer/producer who has successfully pitched - and been pitched to - thousands of times! Also includes an invaluable resource guide.

All of the author's royalties are being donated to the Writer's Guild Foundation for its Literacy Library Program.

Chris Abbott has been writing and producing network television shows for twenty-five years. Starting as a story editor on Little House on the Prairie, she quickly rose from executive story consultant on Cagney and Lacey to co-producer, producer and finally supervising producer on Magnum, P.I.. While on Magnum, she also wrote episodes for such iconic guest stays as Carol Burnett and Frank Sinatra.

Chris has lectured and conducted writing workshops at UCLA, Layola Marymount and the University of North Carolina. She currently lives with her husband and son in St. George, Utah, where she is painting, sculpting and working on a novel.