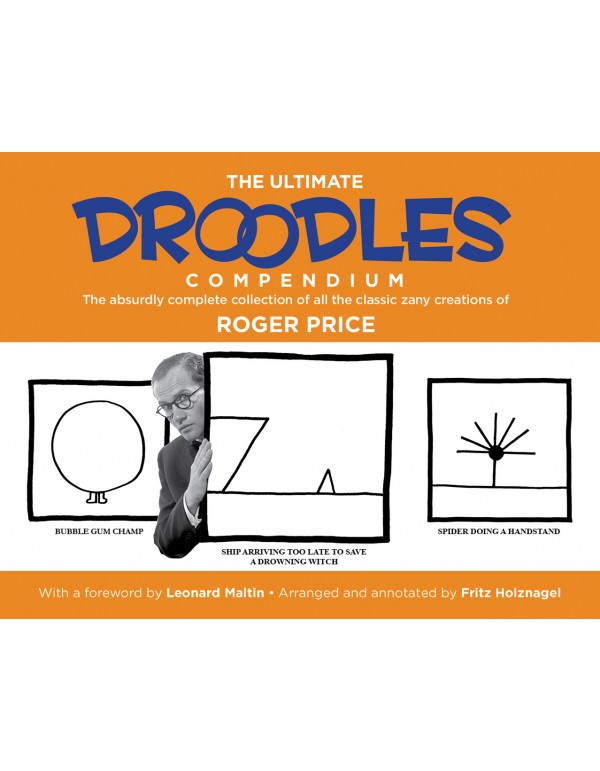 Before the inspired nonsense of Monty Python, David Letterman and the Far Side, there were Droodles. With a few squiggles in a simple square, these clever drawings created absurd scenes like SHIP ARRIVING TOO LATE TO SAVE A DROWNING WITCH (used by Frank Zappa as an album cover), EYEGLASSES FOR A POTATO and CLAM WITH BUCK TEETH And they were all the creation of one brilliant and unpredictable man: Roger Price.

At the height of their popularity in the mid-1950s, fans enjoyed the Droodles TV show, a Droodles daily newspaper column, Droodles magazine features, Droodles cocktail napkins, even Droodles in ads for Lucky Strike cigarettes. Like hula hoops, drive-in movies and UFOs, Droodles were one of the biggest fads of the 1950s.

Now Droodles make their triumphant return to delight a new generation that can use some laughs. The Ultimate Droodles Compendium includes every one of Roger Price's 352 most famous Droodles in delightful new full-quality reproductions, with Price's inspired text and quirky footnotes. There's more: a Roger Price/Droodles reminiscence by beloved media critic Leonard Maltin, a full history of Roger Price and Droodles by Emmy-winning writer Fritz Holznagel, and comments from comedy legend Carl Reiner, Boing Boing's Mark Frauenfelder and others.

"I'm so pleased that Roger Price is being rediscovered by new generations who haven't seen his work before. It's brilliant!" - Carl Reiner

"Finally, a book that honors the great Droodler, Roger Price! One can never get enough Droodles,

and this book proves my point." - Carla Sinclair, co-founder of Boing Boing

"Dear Roger, maybe someday I’ll be writing for you.”   - Bob Hope, quoted by Leonard Maltin in his foreword

"The amazing phenomenon known as Droodles has made a major impact on art, journalism and publishing. The Droodles primetime game show… helped pave the way for many other comedic audience participation programs that have endured for decades."

album cover was a natch match."  - Moon Zappa, on Ship Arriving Too Late to Save a Drowning Witch

"Buy this book now! It's later than you think!" - Roger Price

*  "Americans are not funny, but Roger Price is!"