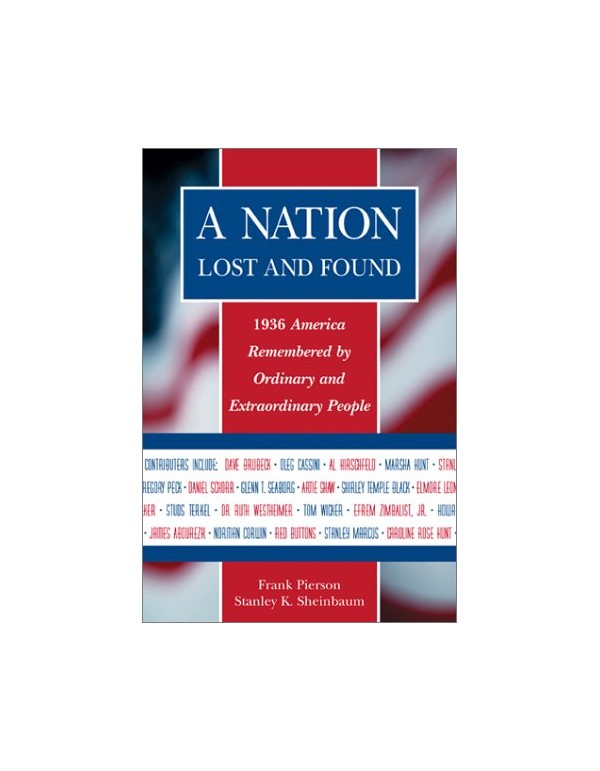 Personal memories from a tumultuous period in American history!

A Nation Lost and Found provides an extraordinary look at the moving personal stories of people who lived through the turbulent mid-1930s – a period in which the spirit of the individual, and the collective spirit of a nation, were awakened.

The voices, experiences and remembrances in this unique compilation echo the patriotic fervor, the expressions of hope, the forecasts of doom, the crows of triumph and the cries of despair that have also resonated since 9/11 and send a message that we have passed this way before. What emerges is a kaleidoscopic picture of both the pain and joy of an era that also holds a powerful message for today’s uncertain world.

Frank Pierson is an Oscar-winning screenwriter and a director whose recent “Conspiracy” for HBA was nominated for 10 Emmys. He is President of the Academy of Motion Picture Arts and Sciences (Oscar), a member of the Sundance Institute and a past President of the Writers Guild of America. His films include “Cat Ballou,” “Dog Day Afternoon” and “Cool Hand Luke.” He lives in Los Angeles with his wife, Helen, three cats and two poodles.

Stanley K Sheinbaum is publisher of New Perspectives Quarterly and a board member of the International Center for Peace in the Middle East. He is a past chairman of the ACLU in Southern California and was a Regent of the University of California from 1977 to 1989. He was also a Senior Fellow at the Center for the Study of Democratic Institutions in Santa Barbara. From 1971 to 1973 he organized the defense in the famed Pentagon Papers trial. He lives in Los Angeles with his wife, Betty, and their poodle, Micci.

“The freshness and immediacy of the voices in A Nation Lost and Found speak to this moment with extraordinary resonance, reminding us that Americans have before experienced a time in which everything known abruptly gives way and a less certain world gets born. This is an astonishing – and a necessary – book.”