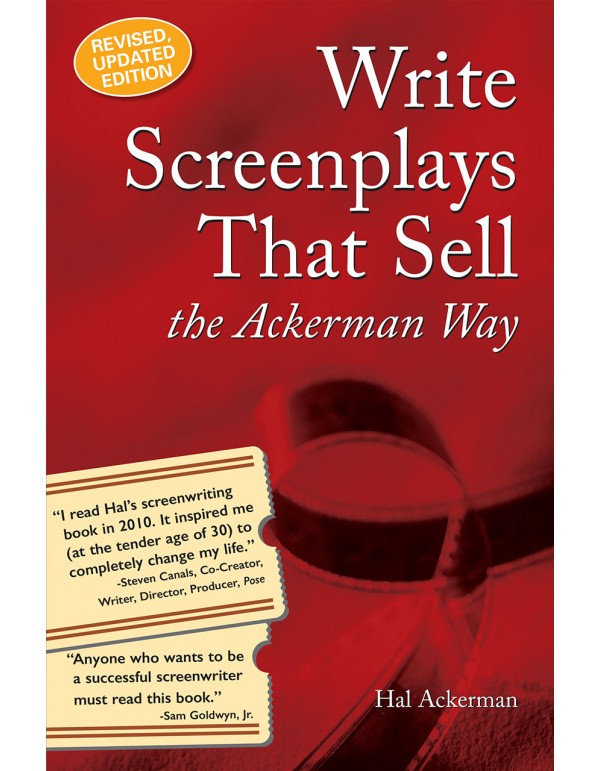 “…this [book] will become one of the more popular screenwriting books out there.”

You don’t have to attend film school to take a screenwriting course with the master teacher in the field – it’s all in his book! Meet Hal Ackerman, up close and personal, just as hundreds of his students have known him through the years.

Over the last three decades, popular UCLA screenwriting professor, co-head of the university’s acclaimed screenwriting program and author, Hal Ackerman has nurtured, mentored and collaborated with hundreds of aspiring screenwriting students, many of whom have gone on to successful, award-winning careers in the industry including films directed by Steven Spielberg and Ridley Scott, and films starring Tom Hanks, Diane Lane, Mark Ruffalo, Nicholas Cage, Gwyneth Paltrow, Christian Bale, and many more. Many have successful television careers creating and writing on hit shows.

With this book every professional writer gets a lifetime collaborator and every aspiring writer has a teacher in residence on his or her shelf.

“Anyone who wants to be a successful screenwriter must read this book.”

“The best new screenwriting book in more than a decade! Ackerman writes with wit and grace and consummate wisdom. He offers exquisite insights into the nature not of film alone, but all creative expression. I eagerly recommend it to writers and to all souls who love movies.”

“Hal Ackerman was my teacher, mentor and guide, but I also think of him as the ‘midwife’ who helped me deliver my script.”

-Pamela Gray,
A Walk on the Moon;
Dirty Dancing 2

“Once you finish this book, you’ll have no excuse for not writing a great screenplay.”

“Chalk up another victory for alumni of the Ackerman school.”

“Hal Ackerman is a brilliant teacher and an amazing inspiration.”

An accomplished screenwriter, playwright, novelist, author and educator, Hal Ackerman joined the faculty at the acclaimed UCLA School of Theatre, Film and Television in 1985. He taught in the screenwriting program for thirty years, the last decade as Co-Area head.

Ackerman has sold material to all the broadcast networks and major studios. His play, Testosterone: How Prostate Cancer Made a Man of Me, was the recipient of the William Saroyan Centennial Prize for Drama. Under its new title, Prick, it won Best Script at the 2011 United Solo Festival.

He has also published two successful novels in a detective series about an aging counterculture P.I. Stein, Stoned, which won the Lovey award for best first novel in 2010. It was followed in 2011 by Stein, Stung.