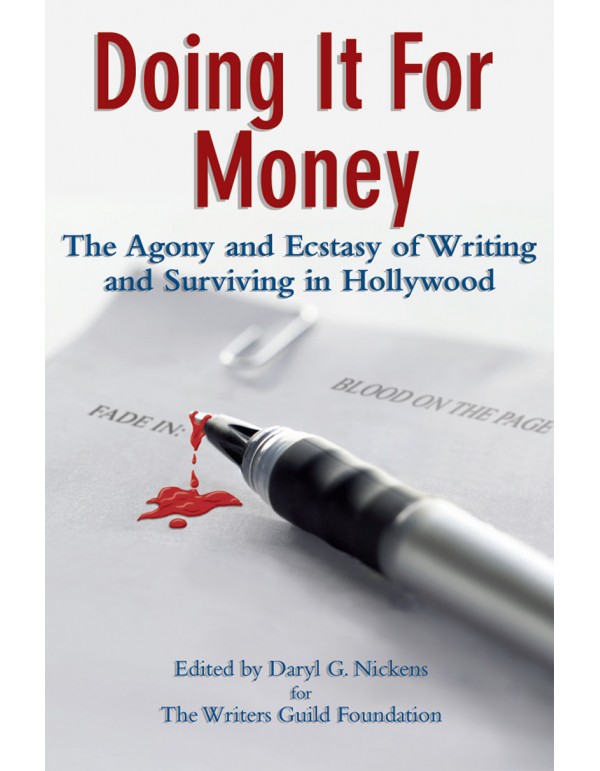 Ah, the life of a successful screenwriter…

Sitting in your Malibu beach house finishing the script that will bring in the next million dollar check… Doing lunch at The Ivy… Hollywood party-hopping where you’re the idol of stars, movie execs and paparazzi…

Not if you’re “Doing It for Money.”

The true process of writing for the Hollywood Machine is finally revealed in these pages.

Clueless executives…temperamental stars… rewrites that “re-wrong” the script you’ve poured your blood, sweat and tears into… Welcome to the wonderful world of screenwriting!

More than a compliation of “war stories,” these insightful, sometimes acerbic, but always entertaining essays from 48 top movie and TV writers cover it all: from attempting to write (and putting it off!); to breaking in; to pitching and selling a script; to tales of rewrites, notes and unexpected “help” from execs, stars, friends of the caterer and everyone between. Contributers include Stephen Gaghan (Syriana, Traffic, NYPD Blue), Terry Rossio (Pirates of the Caribbean, Shrek), Leslie Dixon (The Thomas Crown Affair, Mrs. Doubtfire), John Sacret Young (The West Wing, China Beach) and many more.

Also included are valuable “insider” secrets from Hollywood Pros on making it in this cutthroat industry!

Here, then, is your invaluable ticket to a personal behind-the-scenes tour of what it’s really like to be “Doing It For Money” in the mad, mad world of entertainment.

Doing It For Money: a unique view for pros and fans alike!

“A hilarious, insightful, and thoroughly entertaining book – one that takes you behind the false glamour and glitz the public knows and welcomes you into the dank boiler room below, where the real work for Hollywood is done by those who stoke the furnace. This is an intimate conversation over endless cups of coffee with screenwriters of all generations, a candid and privileged glimpse at the whole crazy Zen tapestry of what we do… the pains, the joys, and the absurdities of our trade.”

-Howard A. Rodman
Professor and Chair
Division of Writing,
School of Cinema-Television
University of Southern California