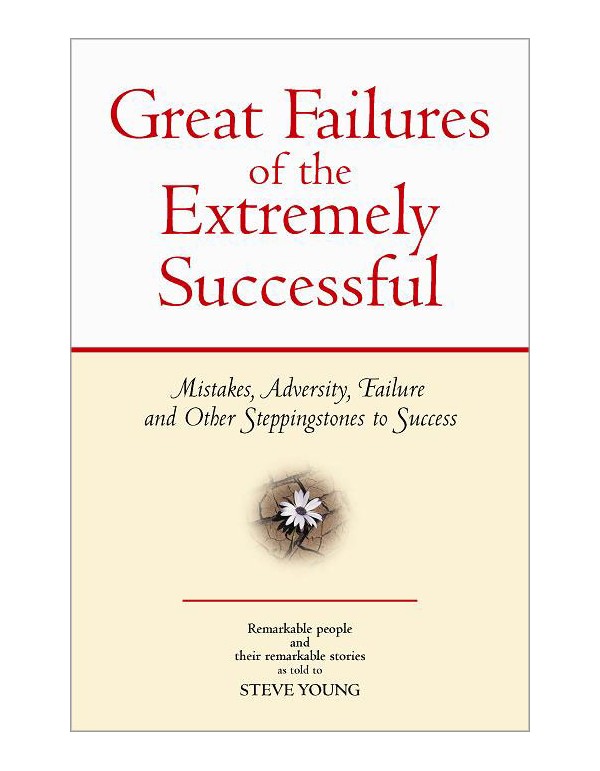 Great Failures of the Extremely Successful

A motivational look at the obstacles overcome by people who have made it!  Now in paperback!

Getting fired could be the best thing that ever happened to you!  It was for these people.

Look what they did after they received their pink slips:

NORM PATTIZ
“Up until the firing, my ambition was simply to become a general manager in the television business. I had no notion that I would be creating a business of my own.”


BETTY WHITE
“I was devastated. I felt it was the end of the world. I thought I would never work again.”

Television Hall of Famer Betty White is probably best known for her roles as Sue Ann Nivens on The Mary Tyler Moore Show and Rose Nylund on The Golden Girls. She has won four Emmys.


MIKE ESPY
“I really thought that my career could be over.”

Mike Espy became the youngest secretary of agriculture and the first African-American named to the post when Bill Clinton appointed him in 1993.


CLIVE CUSSLER
“In three months he got me sacked… I didn’t look for another job.”

Clive Cussler began writing in his mid-thirties after being fired from a job in advertising. His best-selling Dirk Pitt novels have sold over 70 million copies.


SCOTT ELLIS
“I didn’t know what to do. Everyone knew I had been let go.”

Tony-nominated Scott Ellis is known as one of Broadway’s most successful directors.

Gone with the Wind was rejected 25 times before it was published and Zen and the Art of Motorcycle Maintenance was rejected over 100 times. Both went on to sell millions of copies.

And that John Murray Anderson, of the Anderson School of Drama, said “Try any other profession” to Lucille Ball!

And that Albert Einstein said “There is not the slightest indication that [nuclear energy] will ever be obtainable. It would mean that the atom would have to be shattered at will.”

AND did you know that cheese, pacemakers, Velcro®, Ivory Soap®, chocolate chip cookies, stainless steel and Silly Putty® were all invented by accident?

Read the book with all these first-hand stories and facts – your lifeline from failure to success!

Author/interviewer Steve Young relates how hardships, roadblocks, rejections and even physical infirmities cannot stop people determined to succeed! This collection of motivational Stories and anecdotes of famous everyday “failures” shows that success rests on changing “I can’t” to “I will.”

From the worlds of business, science, entertainment, sports, education, politics and arts come inspirational, often humorous, but always helpful reflections from those who refused to let defeat stop them on their road to victory.

Steve Young is a multi-talented writer and motivational speaker. In addition to creating material for prime-time network television (so you know he’s familiar with failure), his stories and articles have been published in magazines and national newspapers. He is winner of the 2000 Prism Award and has been nominated for the Humanitas Prize, both of which recognize his ability to blend entertainment with important social issues. Mr. Young lives in Los Angeles with his wife, Diana, and their children, Casey and Kelly.

Babe Ruth spent his childhood years in an orphanage and, as a baseball player, struck out 1,330 times… on his way to the Hall of Fame.

Elvis Presley was banished from the Grand Ole Opry after one performance and was told “You ain’t goin’ nowhere, son.”

Oprah Winfrey was fired from her television reporter’s job and advised: “You’re not fit for TV.”

“Advice is cheap, but life experience is invaluable, and that’s what this book offers. I started reading about some of the people I admire, and found I couldn’t stop.”

“A must read for parents, educators, counselors and clergy, anyone to whom children turn for support and direction. Realizing that failures or setbacks are not dead ends but merely roadblocks to navigate is akin to getting a lifetime of ‘Get Out Of Jail Free’ cards. This is a book that will be recommended by good friends to each other simply because that’s what friends are supposed to do.”

“I believe that the difference between an ordinary person and an extraordinary one is how one sees oneself. If you believe in yourself, anything is possible. And if you doubt that, read this book!”

“When you finish reading this amazing book, you will never let failure or fear of failure stand in your way again.”

“If any book about failure can succeed, it’s this one. I’ve seen Steve work, and believe me, he knows what he’s talking about.”