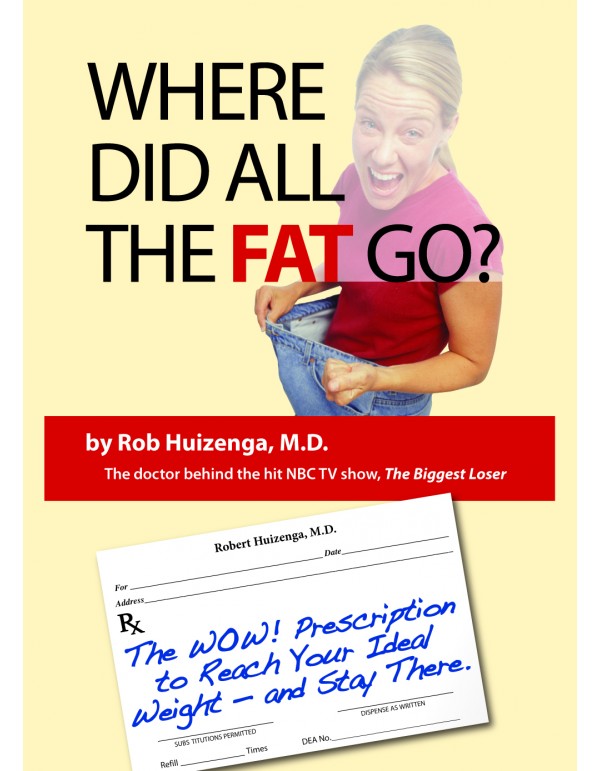 The WOW! Prescription to Reach Your Ideal Weight - and Stay There

New Book by the Doctor Behind NBC's The Biggest Loser - A Weight Loss Program that Really Works!

Where Did all the Fat Go? is based on new scientific obesity research gathered by the doctor behind the hit NBC television show, The Biggest Loser.

Although many diets work in the short term, none has proven effective over a long period. On the contrary, “dieting” often results in weight gain several months or years after the initial weight loss. This book shows you how to reach your dream weight safely and effectively – and stay there!

Look Inside the Book!

Team doctor for the Los Angeles Raiders football team from 1983 to 1990, Dr. Rob Huizenga chronicled his experiences in the book, You’re OK, It’s Just a Bruise – A Doctor’s Sideline Secrets about Pro-Football’s Most Outrageous Team. During its release in 1994, the controversial book sparked a national debate about steroid use and ergogenic aid in professional sports. The book ultimately served as the inspiration for the Oliver Stone film, Any Given Sunday.

A graduate of Harvard Medical School, Dr. Huizenga has been Chief Resident at Cedars Sinai Medical Center in Los Angeles and is currently Associate Professor of Clinical Medicine at UCLA. He is also in private practice in Beverly Hills, California. He has appeared as a health expert on many network news and interview shows and has testified as a medical expert in a number of high-profile trials. In addition to The Biggest Loser, his television and movie consulting credits include Extreme Makeover, WorkOut, Student Body and Into the World.

Dr. Huizenga’s exercise/diet program resulted in incredible weight loss on the TV show’s first two seasons, but Season 3 demonstrated that his method was also applicable to the average person. Thirty-six contestants, without benefit of the show’s live-in boot camp, were sent home to continue his program completely on their own. And they lost nearly as much fat and weight as the contestants on the show.

In addition to diet and exercise, Dr. Huizenga’s program deals with the psychological aspects of weight loss, including depression, temporary setbacks, emotional problems and pitfalls and barriers that have prevented permanent weight-loss in the past.

Where Did All the Fat Go? The WOW! Prescription to Reach Your Ideal Weight - and Stay There! is filled with nutrition and exercise facts – including menus, recipes, illustrated instructions for new exercises, and fact-based inspiration from Dr. Huizenga – to help readers lose fat, not muscle, as they achieve their weight goal (WOW! weight).

A special chapter, “Follow the Losers,” allows readers to compare their own progress, week by week, to that of the 36 Biggest Loser home contestants, who finally decided to take control of their lives and put their health first.

Previously available only to Dr. Huizenga’s Beverly Hills patients, the WOW! Prescription now brings this proven plan to anyone ready to begin a final weight-loss program and start a healthier, longer, and more vital life

Example of a Waist Pull (Sit-up)
Easy-to-follow photos take you through the exercises, step-by-step (page 152)