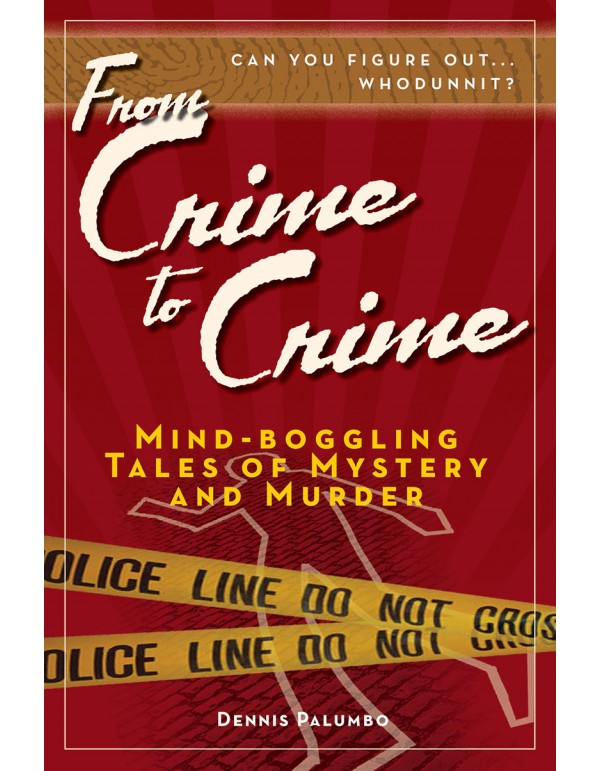 Can you figure out whodunit?

This intriguing collection of short stories features brain-twisting tales of murder and mayhem that will keep readers guessing until the very end… or will they? All the clues are provided, just add ingenuity.

Match wits with such unlikely amateur sleuths as:

Baffling, amusing and suspenseful, From Crime to Crime is bound to captivate mystery buffs of every kind.

Formerly a Hollywood screenwriter (My favorite Year; Welcome Back, Kotter, etc.), Dennis Palumbo is now a psychotherapist in private practice, as well as an author. His mystery stories have appeared in Ellery Queen’s Mystery Magazine, The Strand Magazine and Written By, among others. His novel, City Wars, a futuristic thriller, is currently in development as a motion picture.

His newest crime novel, PHANTOM LIMB (on sale now from Poisoned Pen Press) is the fourth in his Daniel Rinaldi series which features a psychologist and trauma expert who consults with the Pittsburgh Police department.

“This sparkling assemblage features an assortment of fascinating and quirky characters, including a couple of amateur sleuths, a female psychologist who hasn’t thought through the perils of her occupation, and even a young clerk named Albert Einstein who solved a series of brutal murders while simultaneously striking a blow against anti-Semitism. But it’s the idiosyncratic members of the Smart Guys Marching Society that distinguish this collection. In updating the legendary Isaac Asimov’s crime solving Black Widowers, Palumbo adds a touch of Neil Simon to the mix, gathering his odd quintet of armchair sleuths each Sunday for deli, theorizing, philosophizing, arguing and, thanks to one mutton-chopped and brilliantly analytical member named Isaac, solving impossible crimes. Male bonding has seldom been more entertaining.”

“Dennis Palumbo’s gang of affable husbands solves some daunting mysteries with a combination of clever deduction and sly humor that is very appealing. Lots of fun.”

“Palumbo’s contemporary characters dig into these classic, brain-testing whodunnits with humor and wit. It’s a fest for crime-story lovers of all stripes.”

“If only I were smart enough, I’d like to join the Smart Guys Marching Society! (Or should that be “If I was smart enough…”) See, that’s why I’m stuck just reading the stories and trying my best to keep up with the ingenious twists and turns. The Smart Guys are good company – and great story-tellers.”

“Smart and funny whodunnits… as if my own life isn’t hard enough to figure out.”