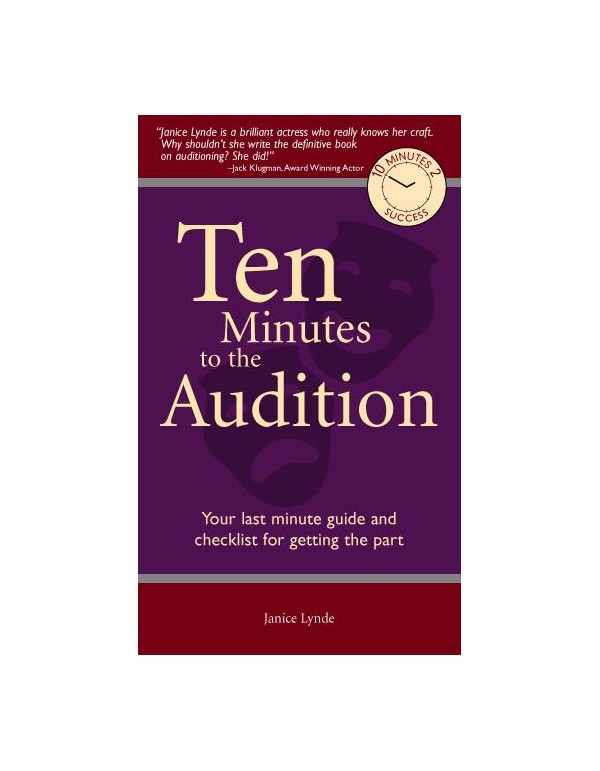 Ten Minutes to the Audition

Q. What happened to the hundreds of actors who took this book’s advice?

“Janice Lynde is a brilliant actress who really knows her craft. Why shouldn’t she write the definitive book on auditioning? She did!”

“I can’t recommend Janice highly enough. She teaches the correct information with humor, and turns out wonderful actors… and they’re working!”

Some of her credits include Six Feet Under, Resurrection Boulevard, Touched By An Angel, Sledgehammer, The Odd Couple, General Hospital, One Life to Live and The Young and the Restless. Broadway credits include Butterflies Are Free, Applause, Pippin and Nine.

As a child concert pianist, Janice won the Van Cliburn Piano Competition and a Metropolitan Opera Scholarship, which brought her to New York where she was accepted by the famed Actor’s Studio. She is also a coach and director who originated the “Directing the Actor” program at the American Film Institute (AFI) and gives seminars at Robert Redford’s Sundance Institute. She lives in Los Angeles.

Q And A with author Janice Lynde

Q. You worked with legendary director/choreographer Bob Fosse. What was that like?

A. Bob encouraged me to be as unusual as I secretly was… not just the ladylike Southern Belle from Louisiana, to explore the darker realms of the psyche that fascinated him and I’d so carefully tried to conceal.

Even now, whenever I get into trouble, with no ideas, I ask “What would Bob do here?” and somehow an idea comes. He was so specific about the thoughts behind his every movement, little things like rubbing your wedding ring finger, with no ring on it, implying divorce. The subconscious behavior of the character always had a gesture of physicality that created visual context… a whole play created in a simple physical gesture.

Q. What are your experiences at the Actor’s Studio?

A. All these legends of theatre and film… Bob, Paddy Chayevsky, Elia Kazan, Lee Strasberg. It was so exciting. They were very protective. I was too naïve to be intimidated by Strasberg, who was also a major influence on me – also teaching me to explore the darkness and the light. I just knew their work was such liberation from the classical world of music I’d grown up in. I was sneaking away from the Metropolitan Opera to study acting… slumming on Broadway! It was much more real to me. Nothing was sacred except dedication and commitment to the art.

Q. You’ve acted on several soaps. Young and the Restless was the first?

A. Yes. Little did anyone know that that show would break the mold of daytime. It was a great role for my combination of talents. I was a concert pianist and the role had me performing live music. It was the first time that had ever happened. I introduced the theme of the show. I was more willing to be daring because I knew I could always go back to New York. The first time I met Dean Martin, he introduced himself to me saying, “You’re my favorite actress.” I was speechless. Lena Horne stopped me in the super market once raving about the show. It seemed so surreal.


Q. To what do you attribute your longevity?

A. I’m sure my survival in the “Biz” comes from so many venues of performance. Onc week dancing on the Ed Sullivan Show to doing sketches on Kraft Music Hall as Groucho Marx’s nurse to Broadway to background singing for all the great artists in pop and jazz to commercials – I was the voice of “Poppin’ Fresh the doughboy” and a singing crab for “Jock Itch.” I even modeled for book covers. My favorite was a cover where I was sitting on a donkey, in a bikini and a long black wig, with a machine gun pointing at the antihero on his knees, begging for his life. I smelled like donkey for a week! I may never have waited tables, but I paid my dues! I think I’m still here due to sheer denial. I never believed in odds or that the impossible wasn’t possible. The odds were I’d never get out of Louisiana… or have my picture in Life Magazine when I was 13 for the Van Cliburn Piano Competition or participate in the first Miss Teenage American Pageant. From Carnegie Hall to Jock Itch! I think it’s perseverance, faith and commitment.